Skip to Main Content
It looks like you're using Internet Explorer 11 or older. This website works best with modern browsers such as the latest versions of Chrome, Firefox, Safari, and Edge. If you continue with this browser, you may see unexpected results.

What is Evidence-Based Practice (EBP)? 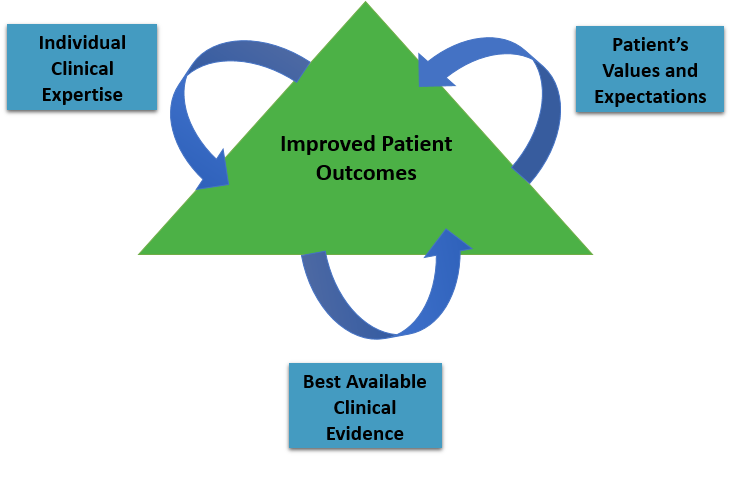 Evidence-Informed Practice is a term that might sometimes be used, especially in nursing research.   According to Woodbury and Kuhnke (2014), this term is used instead of, or as well as, evidence-based practice. They suggest that the term seems to give more flexibility regarding the nature of evidence and its use, “i.e., it implies that many different levels of evidence and types of evidence are needed and used to support decisions in clinical practice.” (p. 29)

They also suggest that the terminology is less significant than the approach. “At the level of individual patients/ clients, it is important that clinicians know the unique values, preferences and circumstances of their clients in addition to the scientific evidence that supports and informs their practice”. (p. 29)

Finding the best evidence requires a systematic cycle of process 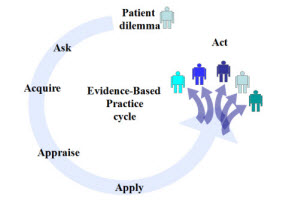 The five 'A's of the evidence:

Acquire: Searching for the evidence - select the appropriate resources and conduct a search in order to acquire the evidence

Apply:  Applying evidence to patient within context - Integrate evidence with clinical expertise and patient preferences and apply to practice

Act :  Evaluate the performance and success of the change in practice.  Ask new questions

·     Health and medicine is dynamic and changing